The Controversial Pepsi commercial was pulled from all platforms after intense backlash from…well everyone and everywhere. Including Kendall Jenner herself.

Following the controversy surrounding Pepsi’s ‘Live For Now Moments’ ad featuring Kendall Jenner which was pulled down over its subject and connotations, the model is reportedly “devastated” by the negative reaction the commercial is getting from the public despite not being involved in the creative process. According to ET, it is stated that “This is the first controversial campaign she has been involved with. Even though she had nothing to do with the production and the message of the campaign, she will be blamed for this since she is the face.”

The insensitive ad experienced extreme backlash after its release, as the images and narrative ‘co-opted’ the current protests that have been occurring around the world. In the ad, Kendall is seen whipping out her blonde wig (which she tosses to an African lady without even glancing at her), as she joins in a protest and offers a can of Pepsi to one of the police offers guarding the crowd. Numerous people pointed out the visual evocation of a photo of Black Live Matters protestor Ieshia Evans facing off with riot police in Baton Rouge (notice the resemblance below?). 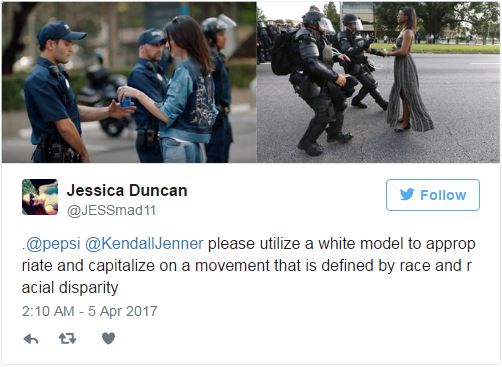 The latest criticism of this now-infamous ad comes from Madonna, who herself starred in a Pepsi ad back in 1989. “When you wake up and realize that shit just really doesn’t make sense!” she wrote on Instagram, captioning a video of Kendall’s commercial, “Side note: my Pepsi commercial was pulled 30 years ago because I was kissing a black saint! #ironic”

When you wake up and realize that Shit just really doesn’t make sense! ?#chosen ?Side Note: My Pepsi commercial was pulled 30 years ago because I was kissing a black saint! ?? #ironic

Madonna also posted the full video of the Pepsi advert Kendall was in to make her statement! Below is the original video of Madonna’s Pepsi advert.

The kiss with the ‘saint’ she refers to is actually from the controversial music video for “Like A Prayer,” which debuted after her commercial. The Vatican condemned the video for its use of religious symbols (burning crosses, sexualizing a saint), and religious groups threatened to boycott Pepsi products. This all lead to Madonna losing her Pepsi sponsorship contract.

Pulling down the recent ad, Pepsi have released the following statement in response: “Pepsi was trying to project a global message of unity, peace, and understanding.”

“Clearly we missed the mark, and we apologize. We did not intend to make light of any serious issue. We are removing the content and halting any further rollout. We also apologize for putting Kendall Jenner in this position.”

Kendall Jenner and her mother Kris have deleted the Pepsi ads, as well as behind-the-scenes shots, from all their social media accounts.